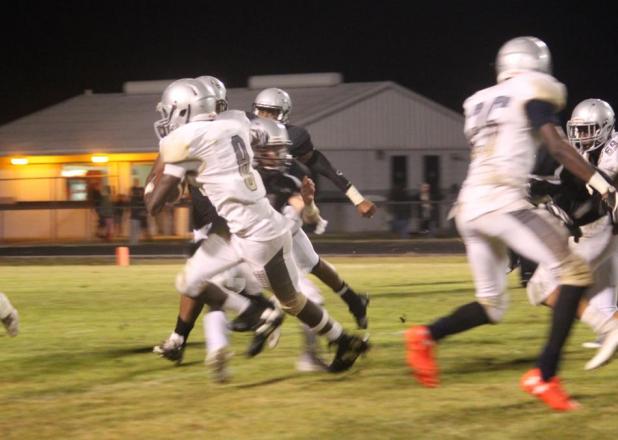 Avoyelles halfback Myron Robertson (8) takes off for some of his game-leading 116 rushing yards last Friday against the Northwest Raiders in Round 1 of the Class AAA playoffs. Northwest defeated the Mustangs, 40-28. {Photo by Connie Giovanetti}

After 11 weeks of Friday (and some Thursday) night contests, the high school football season came to an end in Avoyelles Parish in Round 1 of the 32-team playoffs in both Class AAA and Class AA.

District 3-AAA rivals Avoyelles and Marksville, and 3-AA Bunkie were all on the road last Friday and all were eliminated from the playoffs.

Following is a summary of last Friday’s games. For more details, see this week’s Marksville Weekly News or Bunkie Record.

Somebody forgot to tell Northwestern that Avoyelles is supposed to win the “battle of the clock.”

In a rarity, the Mustangs held the ball less than half the night and had only four more plays than their opponent. The result was a hard-fought but losing 40-28 effort in St. Landry Parish that was still in doubt up to the last minute of the final quarter.

After watching video, J.T. Dunbar suspected his Marksville Tigers might have their hands full with the St. James Wildcats Friday evening.

The No. 4 seeded Wildcats (8-3) beat the No. 29 seeded Tigers (5-6) 39-0 in the Louisiana High School Athletic Association’s Class 3A football playoff opener.

The Panthers knew they had their work cut out for them last Friday when they loaded up the team bus in Bunkie and drove to Amite to face the Warriors in the first round of the Class-AA football playoffs.

There is one thing no coach can teach, but if a team has it, the opponent has a problem. Amite is blessed with great team speed and Bunkie had no answer.

The Warriors stormed out to a 35-0 halftime lead and never looked back as they cruised to an easy 47-3 win over the Panthers to end the Bunkie season.