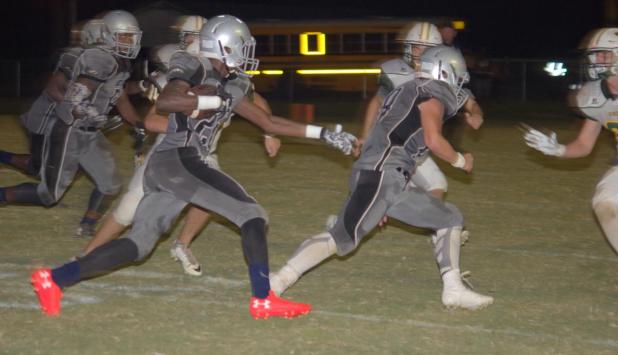 Week 3 in Avoyelles Parish sees a lot of points scored

If you like to see the scoreboard light up, then Week 3 was your kind of week for the three football playing high schools in Avoyelles Parish. There were 189 points scored in the three games. Unfortunately for Avoyelles Parish fans, two of the hometown schools (Marksville and Bunkie) were on the low end of their totals while one (Avoyelles) was victorious.

“We needed this,” a jubilant Avoyelles Mustang shouted as he and his teammates made their way to the post-game huddle following their 58-29 thrashing of the Menard Eagles.

Coach Andy Boone was beaming as he told his players that he was proud of the way they played.

“Enjoy the weekend,” Boone said, “because Monday we hit it again and have to re-focus.”

Avoyelles improved to 2-1 on the young season while the loss dropped Menard to 2-1.

Prior to the game, Boone was concerned because of the number of big players on the Menard team.

“They’re bigger than us,” Boone said. “That can cause us trouble. I think we’re a little faster.”

On the other side of the field, first-year coach Chris Gatlin -- a former coach at Alexandria Senior High -- was expecting a physically tough contest.

“They do what they do really well,” Gatlin said of the Mustangs' ball-control -- some say ball-hogging -- offense.

The Marksville Tigers were cruising Friday night against last year’s 3A state champion Lutcher Bulldogs, and suddenly, inexplicably, the wheels came off.

The Tigers were hitting on all cylinders – offense, defense and special teams – and then two minutes and 16 seconds into the third quarter there was a sputter, a misfire, the engine began knocking and the wheels went flying off in a 35-12 loss to the Bulldogs.

Could it have been Jacoby Williams 1-yard TD run which gave the Bulldogs a two-point lead (14-12) early in the third quarter? Not really, though, it was a contributing factor.

The problem seems to be Marksville’s inability to handle adversity.

For the second straight week, the Bunkie Panthers let an opportunity for a win slip away in the second half.

Last Thursday night, Bunkie and the visiting Buckeye Panthers were tied 14-14 at halftime. Buckeye pulled away in the second half to take a 35-20 decision in the non-district contest.

Bunkie dropped to 0-3 on the season while Buckeye improved to 2-1 on the year.

The Panthers return to action Friday night when they travel to face the DeQuincy Tigers in another non-district game. Kickoff is set for 7 p.m. between the two Class-AA teams.

“I thought we gave a good effort as a team throughout the whole game, but simple little mistakes stopped our drives -- or we gave up big plays to Buckeye,” Bunkie Head Coach Nick Pujol said after the game. “I think there were eight to ten plays for the entire game that hurt our chances.”

While Bunkie had a good game, the Buckeye defense shut down the Bunkie offense most of the night.