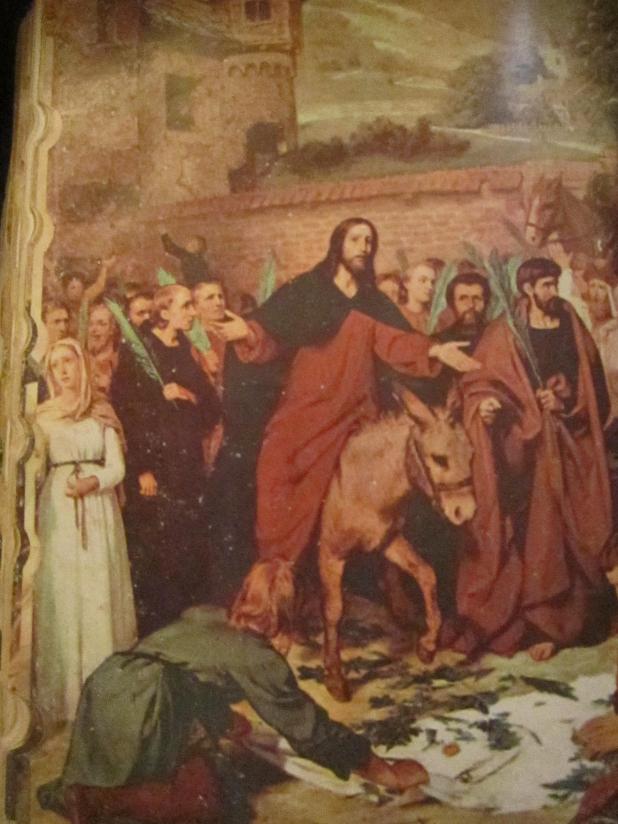 A throng of worshipers hail Jesus of Nazareth as the “king of the Jews,” “son of David” and “messiah” as the desert-dwelling healer/teacher rode into Jerusalem on a donkey. Jewish leaders told the Nazarene carpenter-turned-prophet to rebuke the crowd, but Jesus quipped that if the crowd didn’t proclaim it, the rocks would. {Artwork by Eduard von Gebhardt (1838-1925)}

‘King of Jews’ arrives in Jerusalem

{Editor’s Note: This series depicts how the events of Jesus Christ’s last week in Jerusalem could have been reported by a newspaper. It consists of eight articles, beginning with Palm Sunday and ending with Resurrection Sunday. It is based on the accounts found in the New Testament books of Matthew, Mark, Luke and John but also includes historical information not included in the Gospels.}

JERUSALEM -- The city was abuzz today as the noted healer/philosopher Jesus of Nazareth rode into town amid loud singing and praising. Some in the crowd proclaimed him a new king of the Jewish nation.

Jesus, 33, has been traveling the countryside for approximately three years, spreading a message exhorting repentance, promising judgment for the unrepentant and urging followers to show love and compassion for even enemies and social outcasts.

In those three years he has reportedly healed numerous people afflicted with physical and mental illnesses and handicaps. Prior to that, he was a carpenter in the Galilean town of Nazareth.

He is a direct descendant of the historic King David, a fact some observers say makes him a political -- as well as religious -- threat to the public peace. Still, at no time during his public speaking has he called for Jews to recognize him as their king or to overthrow the Roman government of this region.

Roman authorities have regarded him as a “Jewish religionist” spreading his own interpretation of Jewish teachings. Today’s tumultuous and enthusiastic reception may change that perception.

DEAD MAN RAISED
Jesus caused a stir among the rural population a week or so ago when he reportedly raised a man named Lazarus from the dead in Bethany. Lazarus, a close friend of Jesus, had allegedly been dead three or four days when Jesus visited the dead man’s family.

Immediately after that resurrection, Jewish religious leaders sought to apprehend the Nazarene. The chief priests and Pharisees have been circulating orders that anyone knowing the whereabouts of the carpenter-prophet should let them know so they can arrest him.

Jesus had been in seclusion until yesterday, when he once again surfaced in Bethany at the home of Lazarus’ family.

From Bethany, he traveled to Jerusalem to observe the Passover -- the Jews’ celebration of their deliverance from Egypt about 1,300 years ago. His act of defiance is not lost on the Pharisees and priests, who still have great power and influence among the Jewish people.

As he was riding into town, a Pharisee told him he should rebuke his disciples and others in the crowd for proclaiming him to be “the king of Israel that comes in the name of the Lord” -- an apparent reference to the Jews’ belief in a “messiah” or “deliverer” who will restore their nation to prominence.

Jesus, whose dislike for the Pharisees is well known, stared straight into his critic’s eyes and said, “If they remained quiet, the rocks would cry out.”

Another group of Pharisees later questioned why he did not correct the crowd. Jesus responded with a quote from a Jewish psalm: “Out of the mouths of babes and sucklings you have perfected praise.”

The Galilean took his anti-establishment campaign one step further when he visited the Temple.

In a dramatic incident, Jesus ran the Temple merchants out, turning over their tables and releasing small animals sold there for Jewish sacrifices and offerings.

Some witnesses said the usually even-tempered Jesus wove leather thongs into a whip to aid in his mission to drive the merchants from the Temple.

Jesus was extremely upset by the business activity in the Temple. He cited a Jewish scripture that Jehovah’s Temple “shall be called a house of prayer for all people, but you have made it a den of thieves.”

The incident at the Temple seemed to heighten the religious leadership’s hatred of this desert-dwelling teacher.

Despite their stated desire to kill him for blasphemy, it would appear Jesus is safe from harm as long as he stays among the friendly crowd.

Jesus and his 12 closest comrades are expected to spend their nights in Bethany and their days in Jerusalem during the Passover week.