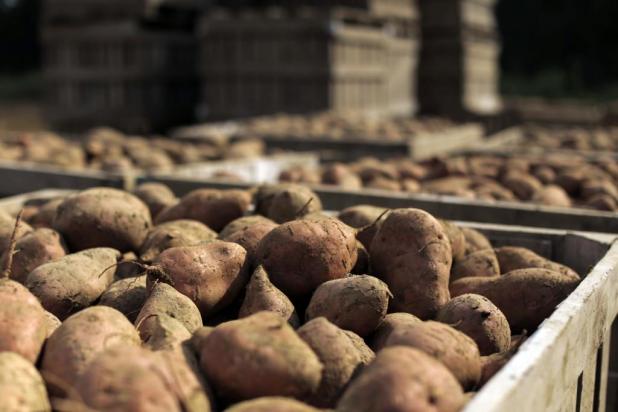 Crates of Avoyelles yams sit waiting to be distilled into vodka at the NOLA Distilling Co. in New Orleans.

N.O. distillery uses only Avoyelles yams for its vodka

Sweet potatoes have been a part of Avoyelles Parish for generations.

No gumbo, Thanksgiving, Christmas or family get-together is complete without at least one sweet potato side dish -- candied with marshmallows, baked with cinnamon, cooked as a pie or cut up as French fries.

Now, those so inclined can have a glass of Avoyelles Parish-grown sweet potatoes to go along with their baked yams and sweet potato pie.

Deshotel Farms, in the Bay Hills community between Hessmer and Bunkie, is NOLA Distilling Company’s sole supplier of sweet potatoes for its NOLA Vodka -- its signature spirit.

“From potato to bottle takes about two weeks, and you can see the whole process live at our distillery,” NOLA Distilling states on its website. “Our sweet potato mash has no added sugar or grains. The only things we add are water, enzymes to assist in breaking down the carbohydrates into sugars, and yeast to convert the sugars into alcohol.”

NOLA’s founder and CEO is Kirk Coco. As the name indicates, Coco has roots -- and a lot of cousins -- in Avoyelles Parish. His parents, Ronald and Joanne Brouillette Coco, are from Moreauville but now live in Baton Rouge.

Although Coco was born in New Orleans after his parents moved from the parish, he said he has spent -- and still spends -- a lot of time here.

“It’s always nice to go up and visit,” he said. “Almost all of my family and Danielle’s grandmother’s side of the family are still in Avoyelles.”

Coco founded NOLA Brewing in 2008 to bring craft brewing back to the Crescent City.

In April 2015, Coco decided to open a distillery. The first bottle of NOLA Vodka was produced in October 2016.

Coco received his bachelor’s and law degrees from LSU and a master of business administration from the University of New Orleans. He also served 11 years in the U.S. Navy.

The vodka is distilled twice, which helps make a smoother drink.

The company describes it as having “a hint of sweetness, an earthy base and a smooth finish,” that makes it a perfect mixer for a cocktail.

The company has recently added two more products, made from the original sweet potato vodka.

The company has a coffee liqueur that is about 18 percent vodka, called Coffee Cruiser, working with New Orleans coffee roaster French Truck.

NOLA Vodka received a bronze medal in its class at the American Distilling Institute’s (ADI) Craft Spirit Awards this past April in Baltimore, competing against hundreds of other vodkas from across the country. Judges’ comments included: “Consistent Balance – easy to drink;” “Very good example; well made; would be enjoyed neat or in a cocktail;” “Very unique flavor.”

In addition to the vodka products, NOLA Distilling has produced a Clear Rum from Louisiana molasses and will be producing a gin within the next few months.

“We didn’t have the other products at the time of the ADI Convention,” Coco said. “We will be presenting them in the competition this year.”

The brand is currently on sale in a variety of stores, bars and restaurants throughout the state.

“We do tastings around the state where our products are sold,” Coco said. “We had a big event at Maddie’s Truck Stop in Simmesport a few months ago.”

The distillery on Tchoupatoulas Street has a “tasting room” and conducts tours so visitors can see how the vodka is made.

The company states that it has a three-part philosophy: to make quality products from local ingredients, give back to the community and to share its passion for craft spirits.

James Deshotel of Deshotel Farms said he is pleased to have NOLA Distilling as a customer.

“We are the largest sweet potato producer in Avoyelles Parish,” Deshotel said. “We ship all over the Midwest and East Coast.”

He said NOLA is the only distillery buying his sweet potatoes. He sends some of his potatoes to the French fry plant in Delhi and a lot to grocery stores.

Deshotel said he has been growing sweet potatoes for 38 years “right here at the same address.”

This past year was not a great year for sweet potatoes due to some untimely rains, he said, but it wasn’t as bad as some years.