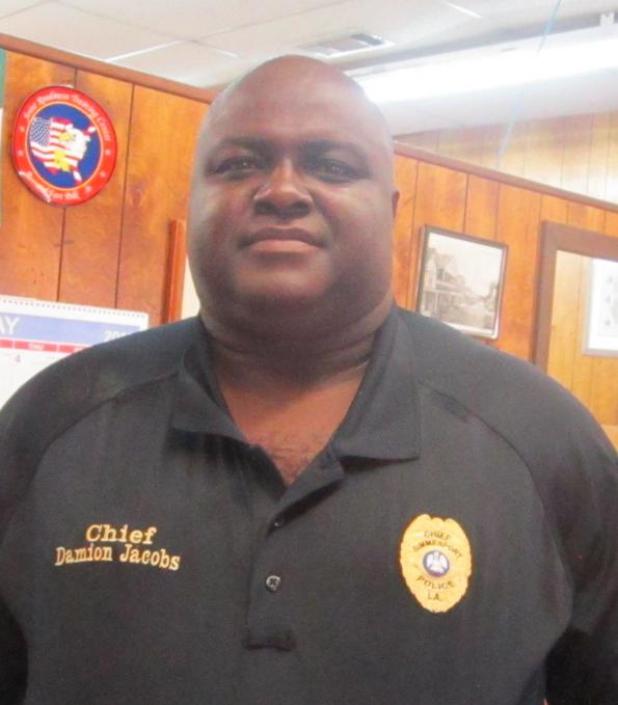 A few weeks after being sworn in as Simmesport’s police chief, Damion Jacobs went to assist other law enforcement officers during a standoff at a Longbridge home. The man in the house fired a shotgun out of a window, hospitalizing one officer. Jacobs and another officer were also struck by pellets from the blast. Fortunately, he sustained only minor injury in the incident.

Jacobs was sworn in as Simmesport’s appointed chief last month, replacing Mike Grissom, who took the position when a new administration took office. Grissom soon decided he preferred the duties of regular police work to those in administration.

“Mike Grissom is a good officer and a value to the force,” Mayor Leslie Draper III said. “There was certainly no ill will on anyone’s part.”

Jacobs joined the Simmesport force in January and has been performing the duties of chief since February. He was officially sworn into the office in April.

Jacobs had been with the Tunica-Biloxi Tribal Police force since 2010. He started with that department as a part-time patrolman while he was still with the Avoyelles Sheriff’s Office. He left APSO when he became a full-time Tribal Police officer in 2012.

Jacobs is a native of Avoyelles Parish and lives in Marksville with his wife, Liza. He has four children -- two grown, ages 22 and 23, and two teens, ages 14 and 15.

He is a graduate of Marksville High and served eight years (1992-2000) in the U.S. Marines. After leaving the Marines, he went to work at the federal prison in Pollock, where he worked for four years.

He said he wants to ensure the Simmesport Police Department is responsive to people’s needs and that officers develop relationships “necessary for creating an active community-oriented policing environment.”

Jacobs said he will strive to create a relationship of mutual trust and respect between police officers and the public they serve.

The police department recently moved into a new station house, two buildings away from Town Hall, in a former dentist’s office.

Jacob will be the fourth man in two years to wear the chief’s badge. Brandon Spillman served as chief for two years from March 2014 to May 2016. He resigned and remained on the force until recently taking a position with another law enforcement agency.

He was succeeded by former Marksville Police Chief Newman Greenhouse, who served until the new administration began Jan. 1.