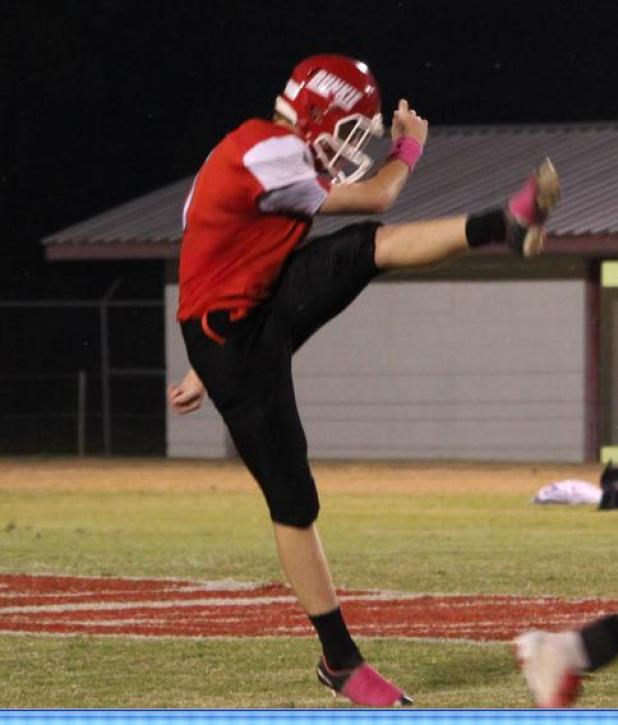 BUNKIE 'BOOT BOMBER'
Panther punter/kicker Mitchell Hukins sends the pigskin sailing. As of Week 9, Hukins was averaging 38.4 yards per punt and had pinned opponents behind their own 20 yard line 15 times. He had made three out of four field goal attempts and nine of 11 extra point kicks. 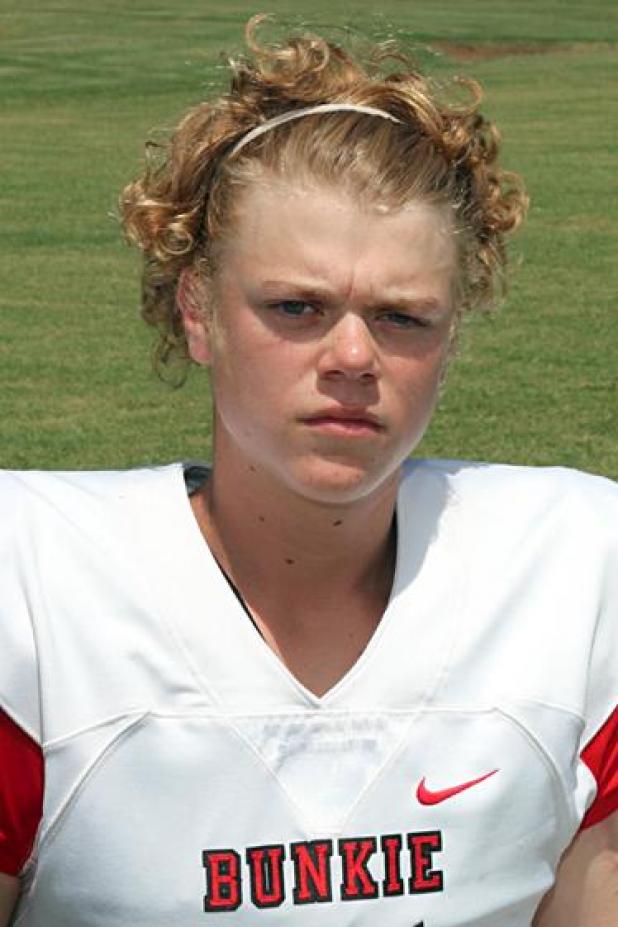 He’s the one who puts the “foot” in football at Bunkie High School, but Mitchell Hukins is more than just the Panther’s punter/placekicker. He’s also more than a tight end/wide receiver, which is his primary role on the squad.

Hukins is a team leader and a role model for younger players. He is the 17-year-old son of Shane and Kristin Hukins of Cottonport. He played football at St. Mary’s until entering high school at Bunkie.

With his “Bo Duke” looks, polite manners and goals of a career in medicine, Hukins could be every Mama’s dream -- and every Daddy’s nightmare -- for their daughter’s high school sweetheart.

But right now the 6-2, 180-pound senior is focusing his attention and efforts on helping the Panthers finish the season on a high note. He is already proud of his teammates for doing much more than many doubters had expected.

“Before the season started we were being looked down on,” Hukins said. “We’re a young team. Most of the starters are freshmen and sophomores. Many people were saying we probably wouldn’t win a single game.

‘HEART HAS NO LIMIT’

“But football is not about experience and the size of the players,” he continued. “It’s about the size of your heart -- and the heart has no limit.”

Hukins said the young, outmatched, outmanned, outgunned Panthers decided early on that if they went down they would go down fighting.

“We are physical and aggressive, even when we lose,” he noted.

Hukins said when he was younger he always wanted to be the wide receiver, sprinting down the sideline, catching the long bomb to win the game.

“I like the idea of being the target,” he said. “I thought the receiver was cool.”

That changed because of his parents’ season tickets to the LSU games. The seats were even with where the placekicker practiced on the sideline, kicking into the net.

“I remember watching the kicker warm up and decided I wanted to do that,” Hukins said. “I was fortunate to be able to follow that dream and to help my team as a kicker.”

As of Week 9, Hukins had scored 18 points -- three out of four field goal attempts and nine out of 11 extra point kicks.

He had caught a few passes as a tight end or wide receiver, but had not scored a touchdown.

Coach Nick Pujol said Hukins’ main value to the team this year has been as a punter -- helping to keep the other teams from scoring.

“His punting has played a big part in every game we’ve won this year and has allowed us to be competitive in some of those we’ve lost,” Pujol said.

Time after time this year, Hukins’ “boot bombs” have pinned teams deep in their own territory.

Pujol said making a team travel more than 80 yards to score a touchdown increases the chances the other team will make a mistake -- a fumble, interception, penalty -- that will put the ball back into the Panthers’ paws.

He practices his placekicking every day and strives to be better.

“My longest field goal in practice is 50 yards,” Hukins said.

His longest in a game this year was 31 yards.

Hukins is not counting on football being a significant part of his future, although he admits he would like it to be.

“If I had an offer from a college to kick or punt for them, I’d probably take it,” Hukins said. “I really enjoy it. I like the fact that I am helping my team in any way possible.”

Barring a call from a recruiter seeking a punter/kicker, Hukins is planning to go to either LSU-Baton Rouge or Louisiana Tech in Ruston to pursue a degree in biology with a minor in chemistry.

After that, he wants to go on to medical school.

His 20-year-old big sister, Madison, is currently in nursing school at Our Lady of the Lake School of Nursing in Baton Rouge.

Once again, his motive is to be able to help those who need the services he has the skills to provide.

Regardless of the Panthers’ won-lost record or whether they get into the playoffs and advance past Week 1, in Hukins’ mind this has been a successful season.