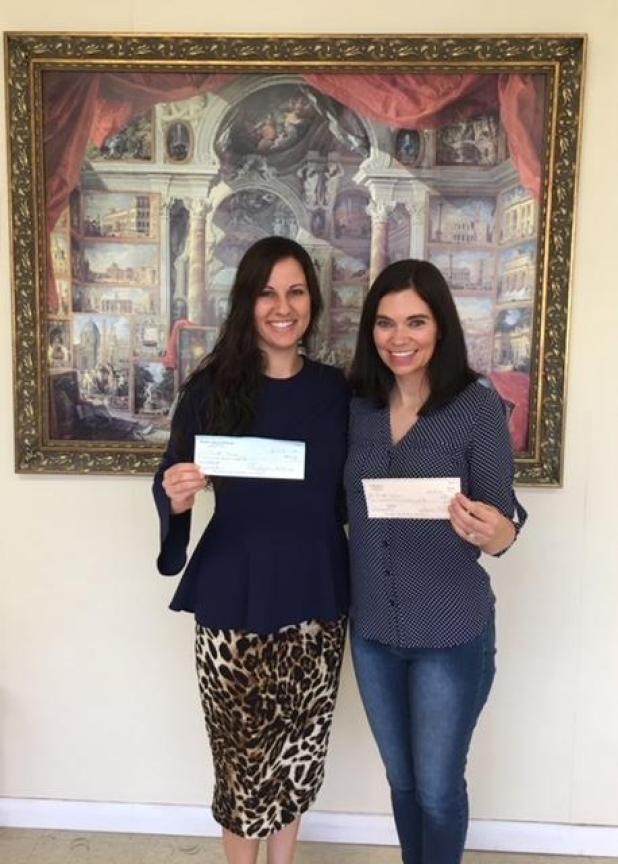 Faith House Coordinator Missy Ducote (left) accepts a $500 donation from the Rotary Club of Avoyelles, presented by Rotary President Rebecca Guillot. Guillot also presented a $250 donation from her business, Flash Tax, to help sponsor this year’s “Touchdown Trivia” fundraiser.
The event is a fun way to address the serious issue of domestic violence by helping the non-profit organization serve victims of abuse. The sports trivia contest, dinner and silent auction will be Nov. 15 at Paragon.

Businesses, organizations, churches and individuals who want to help the many victims of abuse in this area can do so by participating in Faith House’s “Touchdown Trivia Night” fundraiser.

“The community can show support by participation, sponsorship or by donating an item for the silent auction,” Ducote said.

Faith House is a non-profit organization serving victims of abuse. It has had an office in Marksville for six years.

It provides services including assistance with restraining orders, victim counseling, shelter, financial aid, and other advocacy services for victims.

Ducote said this will be Faith House’s first sports trivia event, but it will become an annual affair.

Tickets cost $25 per person, with tickets to be purchased in advance from Ducote.

District Attorney Charles Riddle will emcee the event, which will pit teams of trivia buffs against each other in a quest for a $500 prize.

The ticket price includes a meal and door prizes.

In addition to the Touchdown Trivia contest, attendees will also be able to participate in a silent auction for items donated by local businesses and individuals.

At this time the items on the auction block include a glider rocker from Bordelon’s Furniture, a BBQ pit from Home Hardware Center, a 6-month membership to Anytime Fitness and a 1-hour massage from Soothing Touch in Marksville.

All donations are tax-deductible.

Ducote said teams of six are encouraged, but teams of fewer participants will be accepted.

The contest will be similar to playing the popular Trivial Pursuit board game -- but only with the orange (sports) cards.

For example, a question could be, “Who was the quarterback for most of the Miami Dolphins’ undefeated 1972 season?”

Think hard. If you are a male of a certain age, you probably answered “Bob Griese.”

Earl Morrall came off the bench in Week 5 when Griese broke his ankle. Griese came back in time for the playoffs and started in Super Bowl VII against the Washington Redskins, which the Dolphins won, 14-7.

Bonus question: What is considered to be the “play of the game” for Super Bowl VII?

Answer: Dolphin placekicker Garo Yepremian’s “touchdown pass” -- for Washington. With over two minutes left in the game, Yepremian’s field goal attempt was blocked. He picked up the ball and attempted to pass it. It slipped from his hand and he tried to bat it out of bounds, but hit it into the waiting hands of cornerback Mike Bass, who sprinted down the field untouched to make what should have been a 17-0 shutout a 14-7 contest.

Question 2: What quarterback led the Baltimore Colts to a 13-1 record in 1968, leading the team to Super Bowl III?

Answer: Earl Morrall, who became the starter after Johnny Unitas was injured in the last exhibition pre-season game.

Bonus question: Besides Earl Morrall, what do the 1968 Colts and 1972 Dolphins have in common?

Answer: They were both coached by Don Shula.

“This is a great and fun way for the community to show their support for their local non-profit organization serving victims of domestic violence,” Ducote said. “Please contact me if you want to get involved and for any further questions.”