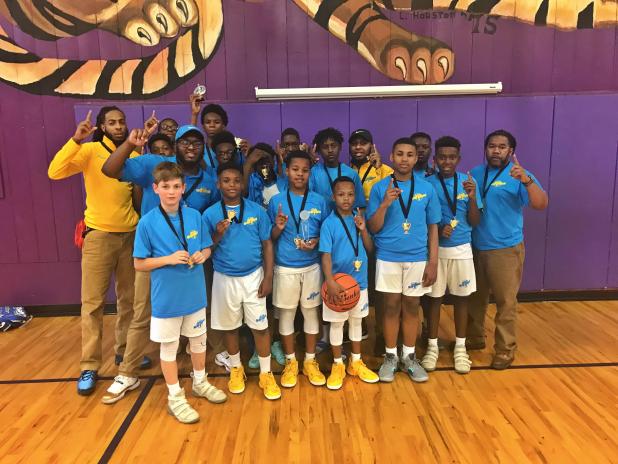 About 20 boys, their coach and four assistant coaches will be heading to Orlando, Fl. to play in a national youth basketball tournament.

The United States Specialty Sports Associa-tion’s National Champion-ship Tournament will be held at Gaylord Palms Resort from June 30-July 3. Romaro Turner hopes his team is able to bring home a trophy in their age division.

Many of those players are on this team, but they are joined by boys from Lafargue Elementary, Avoyelles High, Bunkie High, Marksville High and Avoyelles Public Charter.

“I am proud of this group of young men and the growth they have shown,” he said. “We started out the season a bit rough and wouldn’t even show in the tournaments, but then we started winning games. We have won a few 1st places and a few 2nd places.”

He has two teams for the season, but the teams are combined for the national tournament.

Turner said individual or business donations to defray the players’ costs for the trip to Florida are appreciated.

He said the cost per child is about $375, which includes the tournament registration fee, hotel room and meals.

Turner has tried to reduce costs for parents by putting five boys to a room instead of four.

Anyone wanting more information about the youth basketball program and the USSSA tournament can call Turner at 500-4379 or contact him by email at romaroturner@yahoo. com.

Turner said the boys deserve this reward and the experience of competing in a national tournament.

“Those playing elementary basketball have been practicing and playing since September,” Turner said. “After that season, we wanted to continue with basketball as a positive reward for them.”

They practiced for the USSSA season beginning in December and began playing in tournaments in March.

“They will play about 30 games before we end the season in July,” Turner said.

Each team is guaranteed to play at least four games during the tournament, even if they don’t advance to the championship rounds.