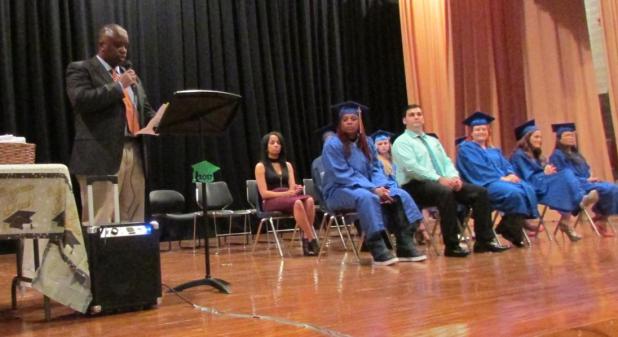 A LONG-AWAITED GRADUATION DAY
Retired Assistant Superintendent of Schools Craig Foster delivers the commencement address during the 2016-17 Avoyelles Adult Education Center graduation ceremony in the Marksville High School auditorium June 29. There were 28 Adult Ed students who earned their High School Equivalence Test (HiSET) diploma in the 2016-17 school year. For some of the graduates, their high school commencement ceremony was delayed by 15 years or more before they came back to finish what they had started as a teenager. {Photo courtesy of Lisa Thevenot}

Some of those in cap-and-gown on the Marksville High stage were in their 30s, and had left high school many years ago. Others were in their late teens and didn’t take as long to realize the importance of finishing their high school education.

But the family members of the graduates on stage that night were just as proud -- maybe more so -- than those of any 18-year-old receiving their high school diploma in a May ceremony.

Adult Education Coordinator Lisa Thevenot praised the 28 Avoyelles Parish graduates in the “Class of 2017” for their courage, determination, perseverance and can-do attitude.

Retired Avoyelles Parish Assistant Superintendent Craig Foster delivered a short commencement address, noting the importance of education in today’s world and the difference having a high school equivalence degree will make in the lives of the adults who have completed that course of study.

Many of the 28 who have earned their High School Equivalence Test (HiSET) diploma over the past several months were unable to attend the ceremonies in the MHS auditorium “because they have obtained good jobs because they earned that degree,” Thevenot said.

The ceremony did not include a valedictorian’s speech, but it did feature “success stories” from several of the graduates.

They told of reasons for leaving school -- an unexpected pregnancy, to get a job to support a disabled parent or just plain rebellious youth who wanted to do things their way.

They spoke of the reasons to return to school to get their equivalence degree -- to earn more money, to feel a sense of pride and accomplishment, to set an example for their pre-teen children about the importance of staying in school.

Thevenot pointed out that the program serves adult education students in Avoyelles and Evangeline parishes, as well as inmates in the Avoyelles Parish correctional facilities.

The next HiSET test in Avoyelles will be given on Aug. 31 in Marksville.

For more information about classes and adult ed services, contact the Avoyelles Adult Education Center at 253-5511.