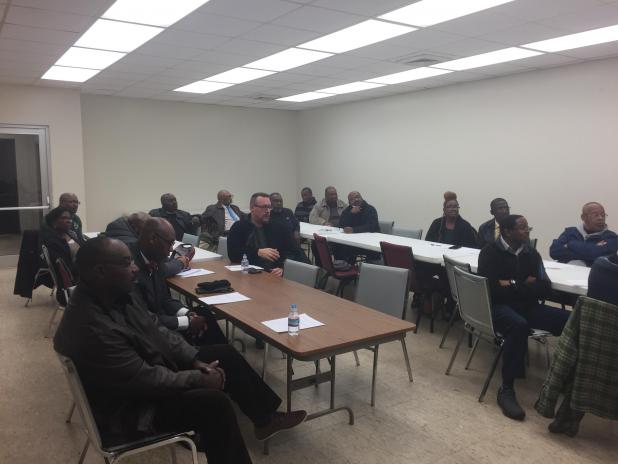 Pastors and other participants in a community forum listen to a speaker discuss possible solutions to the issues of crime and gun violence. The group hopes to continue the momentum from the Feb. 6 meeting in Bunkie City Hall Annex by exploring possible programs to provide economic, educational and recreational opportunities for area youth and young adults. {Photo courtesy of Travis Armand}

Addressing gun violence, especially among youth and young adults, should be a priority, a group of 17 pastors from the Bunkie area said at a recent forum.

Those attending the Feb. 6 meeting in Bunkie City Hall Annex said the lack of economic and recreational opportunities is a major factor contributing to crime and violence among young citizens.

The forum was organized by City Council members Brenda Sampson and Travis Armand. The event attracted participants from Marksville, Simmesport, Cheneyville and other nearby communities in neighboring parishes.

“This is but a small, first step -- a brainstorming session -- in addressing these recent shootings that are plaguing our town and other communities,” Sampson said.

She said pastors are a good resource because they “know their congregations, including their youths, better than anyone.”

It was noted that organized religion no longer plays the important role in the lives of today’s youth that it held in past generations of young citizens.

Encouraging parents to ensure their children are brought up in the church, and that churches offer programs to serve their youth, is one step toward addressing the issue of crime and violence, pastors said.

Other contributing factors to the current crisis is a lack of funding for youth programs, parental apathy and a lack of appropriate male role models.

“Working in tandem, our two churches have come together to sponsor an annual Halloween event,” Jackson said. “We reach beyond race and denomination. Those aren’t even considered.”

Davis pointed out that his church has begun a successful mentoring program for young men.

Rev. Dexter Compton of Amazon Baptist Church recommended the group focus on a few specific goals to meet the needs of youths.

Rev. Hillary Hayes of New Life Baptist Church suggested each church “should be allowed to focus on its particular area of expertise or interest.”

The combined efforts of the churches could have a positive impact on addressing the problem.

Rev. Cedric Brown of Second Edgefield Baptist Church-Cheneyville asked for the “general feeling in the community” and what role city officials see the city playing in remedying the problems.

“Our constituents are angry, upset, scared and disheartened given all of this senseless violence,” Armand told the group. “The consensus is that our youth have nothing to do and no place to do it.

“They are correct,” he continued. “They want us to act. “

Armand said the city needs to work with the churches to find solutions to reduce the violence.

“Our first step is to get everyone talking in one room and on neutral ground,” Armand said.

He also suggested a “Mayor’s Day” event at Haas Auditorium. As envisioned, the event would be a municipal version of Boys and Girls State. Youth would be able to run for mayor, alderman and police chief while learning how city government operates.

The one-day event would also incorporate festival-type activities such as concessions and inflatable jumps.

Armand said he and Sampson have raised the possibility of the city leasing or purchasing the vacant Bunkie Middle School gymnasium from the Avoyelles Parish School Board.

The site could be used for city, civic clubs and churches to provide recreational, cultural and educational programs for area youth.

Armand said the gym “is in great shape, considering it has been shuttered for 11 years.”

The School Board has appraised the building for sale and for lease. A few organizations have expressed interest in individual buildings on the closed school campus.

Participants of the forum expressed optimism that the ideas put forth at the meeting will be pursued.

“I feel we can find volunteers from our numerous churches to provide wholesome, supervised activities to occupy and mold our youths,” said Rev. Freddy Johnson of St. Joseph Baptist Church-Eola.

Pastors and city officials promised to keep the momentum going by speaking to constituents and congregations before holding a second forum at 6 p.m. on March 5 in the Annex.