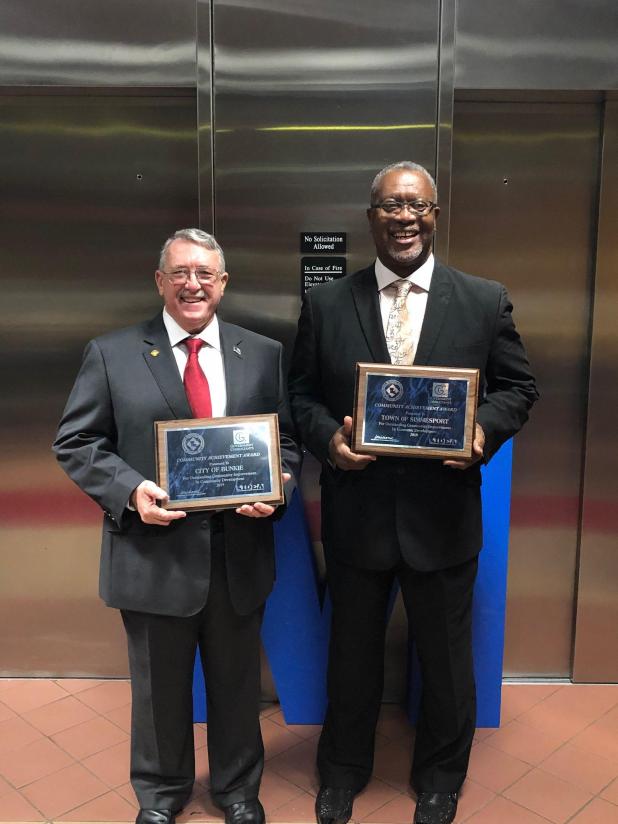 “Simmesport and Bunkie are no strangers to the Community Achievement Awards, LMA Executive Director John Gallagher said. " Their commitment to improving the quality of life for their communities really shows. Avoyelles Parish should be proud of these local governments and the work they’ve done in community development and economic development. LMA is happy to recognize them and we applaud their achievements.”

The awards were presented to a small "red carpet event" gathering at the LMA offices in Baton Rouge on Nov. 9. While a few representatives of the municipalities were allowed to attend the event in person to receive the awards, others were able to view the event online via a live stream.

Gallagher said the LMA refers to the awards as :the Oscars for municipalities, because it really does recognize the achievements of our municipal governments."

Simmesport received its award for its "Crisis and Recovery Plan" that is credited with providing the town the ability to overcome crippling debt that also deprived it from competing for grants.

"I am so excited about this," Mayor Leslie Draper III said. "This award motivates us and encourages the entire team to continue our efforts. It was truly a team effort with a lot of people working together to make it work.

"I thank God for this opportunity," he continued. "I am grateful and excited. Receiving this award was a good way to end my first term in office and to move forward into my second."

Draper was re-elected to a second term as mayor during balloting on Nov. 3.

Simmesport's financial recovery program is focused on an agreement with Sustainability Partners "to provide infrastructure as a service," Draper said.

"The first phase was to upgrade the existing water meter system," he continued. "The existing meters where very old and were beyond their useful life. New ultrasonic water meters, which have no moving parts, were installed."

Once the new meters were in place -- combined with a Town Council decision to raise water and sewer rates to the parish average -- the town saw a 47 percent increase in revenue from its Water Department. Draper said water customers are now paying for what they use and paying a fair rate for what they use.

The agreement with Sustainability Partners set up a payment plan to repay the advance the company gave the town to eliminate about $621,000 in long-term debt that had been incurred by previous administrations, Draper said. The town is paying it back with an affordable monthly fee.

The way the agreement is crafted keeps it from being considered a "debt" on the town's account ledger.

The company is using the Simmesport program as a model for other municipalities around the nation and to promote their program as an alternative to bonds and loans.

"This has enabled Simmesport to turn things around financially," Draper added.

Bunkie was recognized for the effort of the non-profit Move Bunkie Forward organization. MBF has been operating healthy lifestyle-oriented programs in Bunkie since 2014. It recently received a three-year $150,000 grant from Rapides Foundation to expand the MBF program, including hiring Ashley Boggs as full-time coordinator, .

"This group has worked hard to have these programs in Bunkie to encourage healthy living," Bunkie Mayor Bruce Coulon said.

He said the organization provides Bunkie area residents with opportunities for a healthy lifestyle with healthy eating options, fitness and recreational programs, community gardens, and in addressing and preventing tobacco, substance and alcohol abuse.

MBF's goal is to "offer new opportunities to live healthy lifestyles through physical activity, nutrition and healthy choices which are not only beneficial to individuals, but to the City of Bunkie," an MBF spokesperson said.

Over the past few years, the organization has been able to fund over $100,000 worth of improvements in the Bunkie area. This includes improvements to children's playgrounds, an adult exercise area near the walking track and resurfacing the public tennis courts. It also conducts several educational programs and created a community garden and "healthy grocery store" campaign to promote healthier food choices.