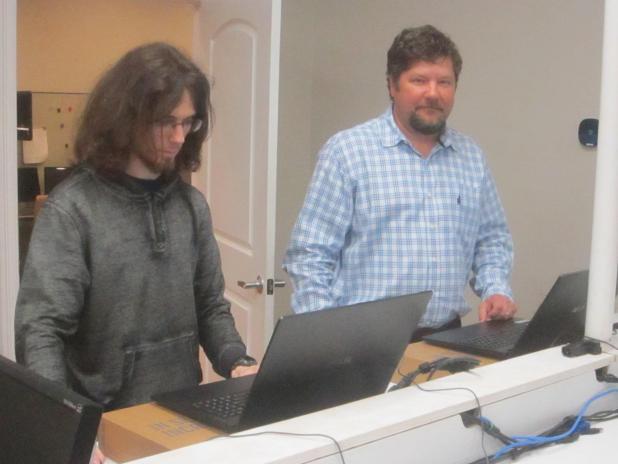 Avoyelles Parish is known for its fertile fields, abundant hunting and fishing areas and a love of life displayed in its food and festivals.

It is not known as the birthplace of a high tech computer company -- but it is.

Daryl Deshotel grew up in the Bay Hills communtiy between Hessmer and Bunkie. He learned the value of a hard day’s work on his uncle James Deshotel’s sweet potato farm. That experience gave him a strict work ethic, and it also convinced him that he didn’t want to spend the rest of his life wiping sweat and dirt out of his eyes and mouth.

He also said he learned Avoyelles Parish is just as good for growing businesses as it is for growing sweet potatoes, sugar cane, corn, soybeans and anything else that can be grown.

Deshotel attended Hessmer High until it was closed by a federal court order in 1988. He graduated from Bunkie High in 1992.

Deshotel, 44, said he went to LSU and earned a degree in construction management with plans to one day operate his own construction company. A part-time job in a computer tech company led him in a different direction.

“In my last year of college, my boss offered me a full-time job when I graduated,” Deshotel said. “I took 19 and 21 hours my last two semesters to make sure I graduated. I really wanted to go to work right after graduation.”

Only a few years later, Deshotel came home to Avoyelles Parish to start his own computer company. Deshotel and Keith Fontenot, a co-worker at the Baton Rouge company, started Detel Wireless in 1999.

In 2002, they created a second company, Detel Computer Solutions. Fontenot passed away in 2010.

One thing he was pleased with is that not one Detel Wireless employee lost their job when the company was sold.

“Conterra kept every Detel employee, so there was no negative impact to the local economy or to those employees,” Deshotel said. “Detel Wireless provided internet and wide area networks for school systems and businesses. Detel Computer Solutions manufactures and sells computers -- desktops and laptops -- as well as smart boards and Chromebooks for school systems.”

Detel Computer Solutions took over a few operations that Detel Wireless did that Conterra does not, “so customers have not lost any services -- and actually have gained services -- as a result of the sale to Conterra,” he added.

Conterra operates out of the former Detel Wireless building between Hessmer and Marksville.

For awhile, Detel had offices in Hessmer and Baton Rouge.

Deshotel closed the Detel Computer Solutions offices in Baton Rouge and bought a building on La. Hwy 1 in Mansura to house the manufacturing area, warehouse and offices for the company.

The company still has a data center in Baton Rouge that services the many computers in classrooms that Detel has installed over the years.

“We serve 45 of the public school districts, including Avoyelles Parish,” Deshotel said. “We also serve four of the five Catholic diocesan’ schools, including the Alexandria Diocese and numerous charter schools around the state.”

“We are going to build a new warehouse and create new offices here,” he said.

The company is also progressing as technology progresses, so Deshotel is not concerned that his company will fall behind the times and become obsolete.

“There is definitely room to grow in this business,” he said. “With the new cloud-based services, it’s a new business.”

Avoyelles has very little industry. Entertainment, restaurants/fast food, government employment and services are the primary non-farm employers. So when Deshotel told his co-workers he was going to start a computer tech company in Avoyelles, he received a lot of well-meaning advice.

“People told me I was crazy to start Detel in a rural, agricultural parish like Avoyelles,” Deshotel said. “They said to open it in Baton Rouge, New Orleans, Lafayette.

“They just didn’t get it,” he continued. “Avoyelles Parish is centrally located in the state. It is near a major interstate. It is ideally located to serve the entire state -- from Shreveport to Thibodaux and everywhere in between.”

Deshotel said his little Detel went head-to-head with giants of the tech industry and came out on top.

Detel is a “Premier Provider” of Intel and a “Microsoft Gold Partner” -- both prestigious honors bestowed on computer companies by those industry leaders.

The computers Detel sells to schools and businesses are built in the Mansura site with parts from various suppliers, including Intel.

Deshotel says he and Detel are in Avoyelles Parish to stay. He has grown a successful business here, from scratch, and he said the future can only get brighter.

He hopes his company’s success will not only improve the local economy, but will also entice others to open their businesses in this this centrally located heartland of Louisiana.