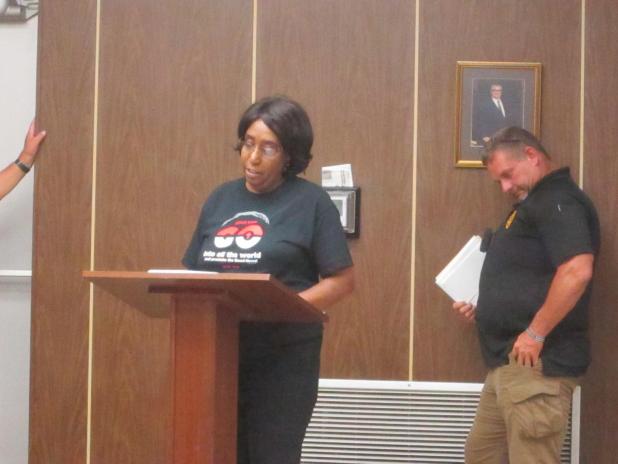 Brenda Blackman-Dawson of Bunkie (left) was one of several African-American residents who expressed complaints and concerns about actions by Police Chief Scott Ferguson (right) and other municipal police officers at the Aug. 8 Bunkie City Council meeting. {Photo by Raymond L. Daye}

Well over 100 concerned citizens of Bunkie -- most of whom were upset by a perceived racial bias by city police officers -- filled the City Hall Annex’s council meeting room and hallways on Aug. 8. In addition to several angry presentations concerning the town police actions toward its minority residents, there was also a call to begin a recall of Police Chief Scott Ferguson and Mayor Bruce Coulon.

One Bunkie citizen who was not able to physically attend the City Council meeting was still prominently present in spirit -- Reginald Smith. Smith, 20, was killed in a single-vehicle ATV accident at about 1 a.m. Aug. 3.

The meeting began with a moment of silence in his memory. His family was mentioned in the opening prayer. He was the primary topic of consideration during the public discussion segment of the monthly meeting.

CITIZEN COMPLAINTS
Smith’s fatal accident has provoked allegations that police pursued Smith, leading to the accident. There was even a theory presented that a police vehicle may have struck the ATV in the rear, causing the accident. Since Smith’s death, social media has been heavy on emotion and light on evidence to support allegations of wrongdoing or even impropriety by Ferguson or any of his officers in the accident.

State Police are investigating the case to determine if there is any such evidence to support those allegations.

Ferguson disputed several allegations made by citizens and challenged them to provide video evidence to support their allegations of police misconduct. He has maintained he was following proper police procedure the night of Smith’s accident and has indicated there was no high-speed chase during the early morning hours of Aug. 3.

Quazeric Reed -- a friend of Smith’s and a main organizer of a grassroots protest of recent city police actions -- raised the issue of recall.

Most negative comments were aimed at Ferguson, so it was a surprise when Reed lumped Coulon in with his threat to initiate recall proceedings against the elected officials.

“I cannot tell the police chief what to do,” Coulon said. “He is an elected police chief and it is his responsibility to run his department.”

Coulon said the mayor and council’s role in Police Department operations is to allocate funding for the department’s budget and to approve or reject the police chief’s recommended personnel changes -- hiring, firing, reclassifying, etc.

There were many words uttered that night, but “community,” “unity” and “communication” were probably among the most often spoken.

Reed said most citizens he has spoken to would not vote for Ferguson or Coulon if given that choice today.

Coulon was elected without opposition in the March 2018 election after one candidate was disqualified for not living in Bunkie and another withdrew shortly after qualifying for office.

Ferguson came close to winning a four-man race in the primary and then handily defeated incumbent Bobby Corner.

Reed asked those packed into the annex if they would vote for Ferguson and Coulon. Most gave a firm “No” response while a smaller number loudly said “Yes.”

Coulon told the crowd that all of their concerns and complaints -- about Smith’s death and other incidents raised during the discussion period -- will be “looked into.”

Councilman Lem Thomas -- one of two black council members -- indicated Bunkie is getting a reputation elsewhere in the state for its police officers’ actions.

“I was at the LMA (Louisiana Municipal Association) convention and a man heard me say I was from Bunkie,” Thomas said. “He came up to me and said, “Man, what’s wrong with you guys in Bunkie?’”

Thomas then said the man witnessed a police officer “harassing a guy in a red car” and then the officer followed him until he left the city limits.

Brenda Sampson, the other African-American on the council, said there should be “a good interaction of the police with the community.

Sampson said the public should give police officers their much-deserved respect, “but people deserve respect, too.”

Thomas told those in the audience to “remain diligent” and not to remain silent with their concerns and complaints.

“I like you complaining,” he said. “I want you to complain to me.”

Then, speaking to Ferguson and police officers in attendance, he asked rhetorically if when they are on patrol “are you policing or hunting? Protect and serve!”

“I look forward to the day when our community comes together,” Sampson said. “We can’t get anywhere if we don’t communicate -- and you can’t always be the one talking. You have to listen, too.”

Councilman Bill Longoria said it is “a shame that a tragedy had to bring this community together like this.”

Coulon said he is at City Hall all day, every day and “my door is open. I try to deal with issues as they come up and not let them pile up.

Reed said a planned protest on Monday (Aug. 12) was called off “to give the family (of Smith) time to grieve.” He said a community protest will likely be held in the near future.