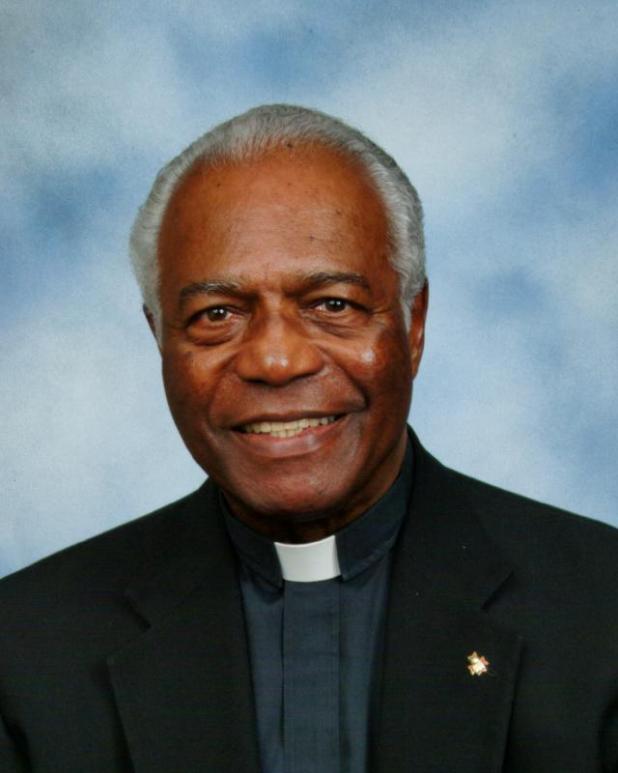 The Funeral Mass for Father August Louis Thompson will begin at 10 a.m. on Tuesday, Augsut 20, 2019. Priests of the Diocese of Alexandria will con-celebrate the Mass. Father James A. Ferguson, Rector, will be Homilist.  Interment, under the direction of Kramer Funeral Home, will be at the Maryhill Priests’ Cemetery, 600 Maryhill Road, Pineville. Arrangements are under the direction of of Mabrie Memorial Mortuary of Houston.
Visitation in Alexandria at Saint Frances Xavier Cathedral will be on Monday, August 19, from 5:00 to 8:00 p.m.  The Rosary will be prayed at 7 p.m. On Tuesday, August 20, visitation will continue at the cathedral from 8 until 10 a.m.
Father August Louis Thompson, a retired priest of the Diocese of Alexandria, passed from this life on Sunday, August 11, 2019 in Houston, Texas.  Fr. Thompson was born in Baldwin, Louisiana on July 7, 1926, the son of Louis D. Thompson and Eunice Barard.  He graduated from Willow Street High School in Franklin, Louisiana and began his seminary formation at St. Augustine Seminary in Bay St. Louis, Mississippi in 1941.  Fr. Thompson studied at St. Mary’s Seminary in Illinois and St. Paul Seminary in Iowa before finishing his B.A. degree at Notre Dame Seminary in New Orleans in 1957.  He was ordained a priest for the Diocese of Alexandria at St. Louis Cathedral in New Orleans on June 8, 1957. Fr. Thompson was a well-respected priest of the diocese for 62 years and achieved significant recognition in areas of social justice throughout his priestly service.
Fr. Thompson served as parochial vicar at St. Anthony’s Church in Cottonport and as administrator and pastor of St. Charles’ Church in Ferriday.  In 1969, Fr. Thompson was appointed pastor of Our Lady of Prompt Succor Church in Mansura, Louisiana.  During his 16 years in Mansura, Fr. Thompson built the Uganda Center and served as a voice for Black Catholics on a local and national level.  In 1985, Bishop Friend appointed Fr. Thompson as rector of St. Francis Xavier Cathedral in Alexandria.  In 1991, Fr. Thompson was appointed as pastor of St. James Memorial Church and St. Juliana Church in Alexandria.  Fr. Thompson retired from active ministry in 1997.
In over fifty years of priestly service, Fr. Thompson served the Church and the community in a variety of ways.  He served as a notary public for Concordia and Avoyelles Parishes.  He served as a member of the Board for the National Black Catholic Clergy caucus from 1968-1980.  He served as diocesan spiritual director for the Legion of Mary, Vicar for Black Catholics, as a member of the Presbyteral Council, the College of Consultors and on the Diocesan Liturgical Commission for the Diocese of Alexandria.  He was the first black priest to be a member of the Board of Directors of the National Federation of Priests’ Councils as a provincial representative.  Fr. Thompson founded a rent-subsidy housing project in Mansura known as Imani Court for which work he received a national award from the National Black Catholic Convention in 1973.  Fr. Thompson was awarded the Outstanding Citizen Award from the Black Students Union of  Lewis University in Romeoville, Illinois in 1980.  In his retirement, Fr. Thompson served on the board for St. Mary’s Residential Training School.