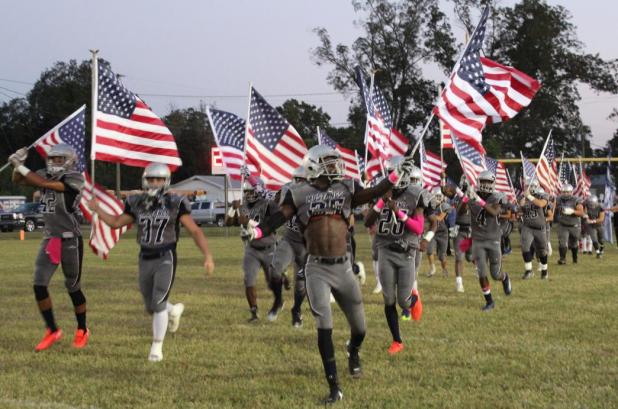 SHOWING PRIDE IN THE FLAG

Each member of the Avoyelles High Mustangs football team carried a U.S. flag as they entered the field for their Homecoming game against archrival Marksville. The intent was to honor military veterans and to show that local high school football players do not share some NFL athletes' position of kneeling in protest when the National Anthem is played before a ball game. Avoyelles defeated the Tigers, 36-30, breaking a 21-game losing streak against Marksville. {Photo by Connie Giovanetti}

If a young man was born the night the Marksville Tigers started their domination of the football rivalry with the Avoyelles Mustangs, he can go out and have his first legal beer tonight to mark the end of that winning streak and/or the end of the Mustangs' "Marksville curse."

After 21 years a curse has been broken, a monkey has been shaken from a back and a losing streak has ended -- but it didn't go down without a fight.

After Avoyelles regained the lead late in the 4th Quarter on a touchdown pass, the Tigers mounted a furious 2-minute comeback attempt -- coming 15 yards short of tying the game with a touchdown and possibly winning if the extra points were added. Avoyelles' secondary knocked down two passes in the endzone in the last 10 seconds to secure the historic win, 36-30.

"I've always been one to say, 'Act like you've been there before,' but to tell the truth, I don't know how to act because I've never been here before," Avoyelles Head Coach Andy Boone said after his first victory over intra-parish and District 3-AAA rival Marksville. "I guess it is a time to be excited and act like a kid."

Boone said the game was won "solely on heart. At the half, the boys were upset that Marksville had taken the lead. I told them that Marksville was not going to lay down in the second half and if they wanted to win, they had to step up and fight with everything you've got."

He said the team came out and played solid football. The defense made several key plays. Running back Derrick Coleman "was a beast, just running over people" and speedy Myron Robertson "had some big runs."

Tigers Head Coach J.T. Dunbar told his team in the post-game huddle "not to be pointing fingers at anyone. There are lots of things to point at."

He said the players can "lay down and quit" or decide to play hard to win the next three games remaining in the season.

"We are all in this together," Dunbar said. "Your character and toughness will be challenged, but you will have to move on. Learn from this and move on."

Marksville missed some key opportunities during the game that could have sealed the win, he noted. The biggest was not capitalizing on a 4th down stop just outside of Avoyelles' "red zone." The team ended up losing yardage on a penalty and sack and was forced to punt it back to Avoyelles.

"If we had scored, we would have increased our lead at that point," Dunbar said.

Had that happened, it is unlikely Avoyelles would have been able to regain the lead.

"It comes down to the fact that Avoyelles wanted this game more than we did tonight," Dunbar said. "It was a great football game, but they wanted it the most."

Key points about this game:

Avoyelles held the ball all but 42 seconds of the 1st Quarter, scoring on its first possession and then recovering an onside kick and scoring again.

Marksville scored three touchdowns in the 2nd Quarter while Avoyelles scored only once. The Tigers led 22-20 at half, having converted two 2-point attempts while the Mustangs were only successful on one attempt.

Avoyelles opened the 2nd Half by recovering the onside kick and then scored on the next play, with Robertson going 52 yards for the TD and QB Brody Knott taking the ball in for the extra 2 points.

Marksville regained the lead on its next possession and then held Avoyelles on 4th down, taking over deep in Mustang territory as the 3rd Quarter ended. A holding penalty backed them up and then a sack on 3rd and 19 put MHS near midfield, forcing the Tigers to punt.

Avoyelles took over on its own 21 with 10:29 left in the game. AHS then embarked on a drive that consumed 8 minutes and ended in a 21-yard pass and an extra 2 points to put the home team ahead. However, it seemed they may have left too much time on the clock.

With 2:25 remaining, Marksville started on its own 42 after Avoyelles kicked deep but failed to hem in the returner. A 20-yard run silenced the Homecoming crowd on the Mustang side of the field and sparked a noisy call for the defense to rise up from the visitors' bleachers. Another good gain reached the Avoyelles 25 with only 41 seconds left. Another gain put the Tigers at the 15 with 10 seconds remaining. A pass into the endzone was knocked down. With only 3 seconds left, enough for one play, the pass sailed into the corner of the endzone and was knocked away by a Mustang defender.

And that, as they say,was that.

{For more details on this, and the Bunkie-Winnfield game, see next week's edition of the Marksville Weekly News or Bunkie Record}